Important information! Our business is open but some shipping services may have been affected. Read more here!
Register Sign in
Sign in

There´s a common notion that a FMIC would be superior to a full size drop-in solution in terms of performance. That the positioning of the intercooler would be the number one factor on how it performs and not the actual properties or size of it. We have long been aware of this being a falsity by necessity, but without true data to verify our claim not every customer has taken our word for it.

Recently we have developed a whole lot of products for the 9-3, both V6 and 2,0T. As we had a car available, we thought to catch the opportunity and make this comparison once and for all. To start from the beginning, with all the facts presented, here are some key features that goes into the equation:

When: The tests are performed during two sequel days with the exact same ambient temperature (23°C, 73,4° F) on a closed air strip.

How: The tests are executed like this: Full on from 40-200 km/h, heavy breaking down to 40 and then up to 200 km/h again. Two hard pulls, flat out. This is done to evaluate how well the different pieces recover when they are not allowed to rest and cool down.

What do you want? What gives the best combustion, the greatest bang and thereby the best performance, is cold air in as large quantity as possible. Cold air holds a greater mass than warm air, and a great flow is not worth much if all that´s reaching the intake is hot air. Meaning: a clean pipe will flow considerably better than any cooler there is, but it won´t cool the air a bit. A core too dense will have great cooling abilities but disturb the amount of air reaching the intake negatively. In addition, the tank design is crucial to any intercooler, regardless of height, width and its internals. There´s more to write about this, much more, but at least with these corner stones we can interpret the information below better. 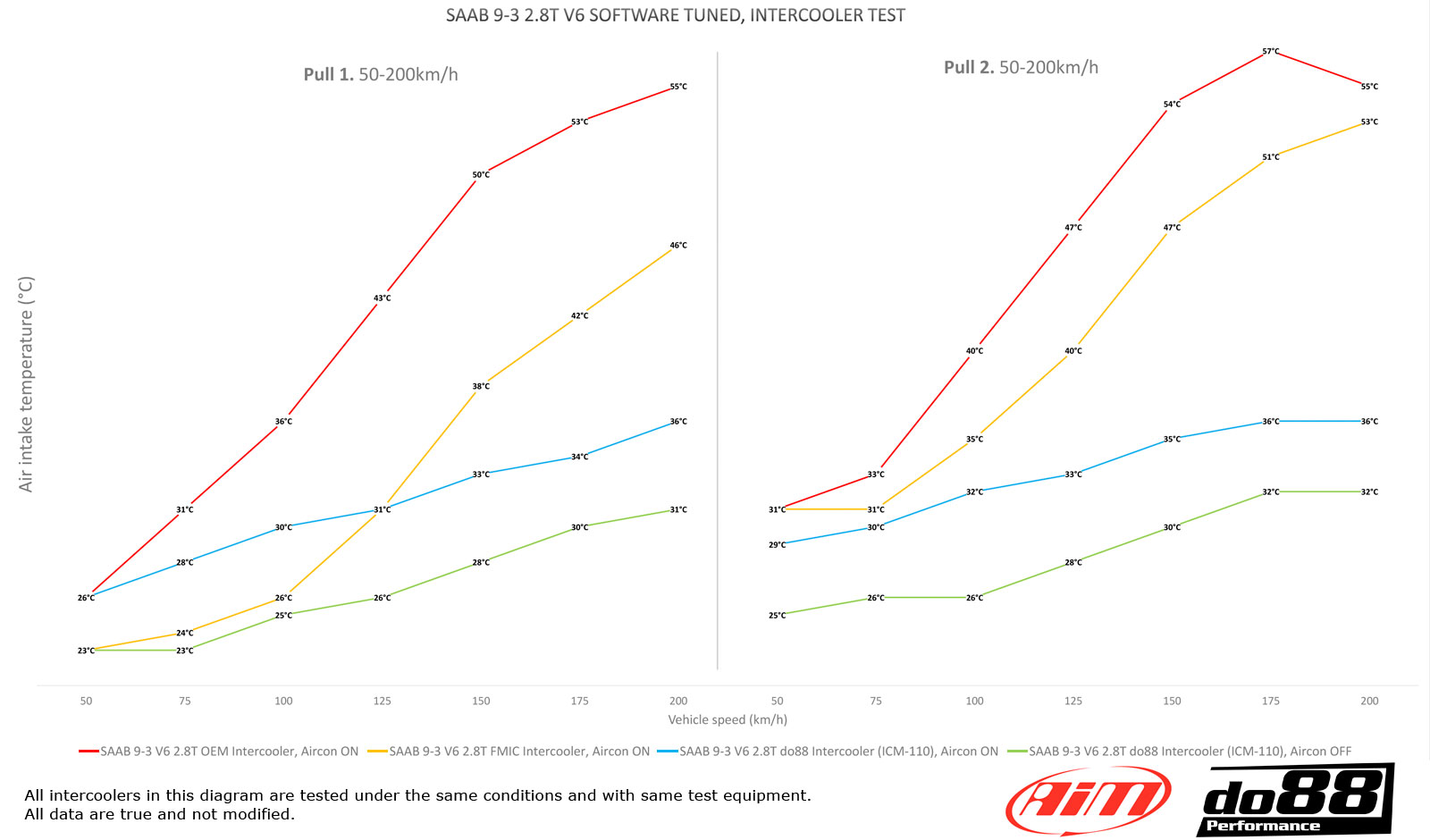 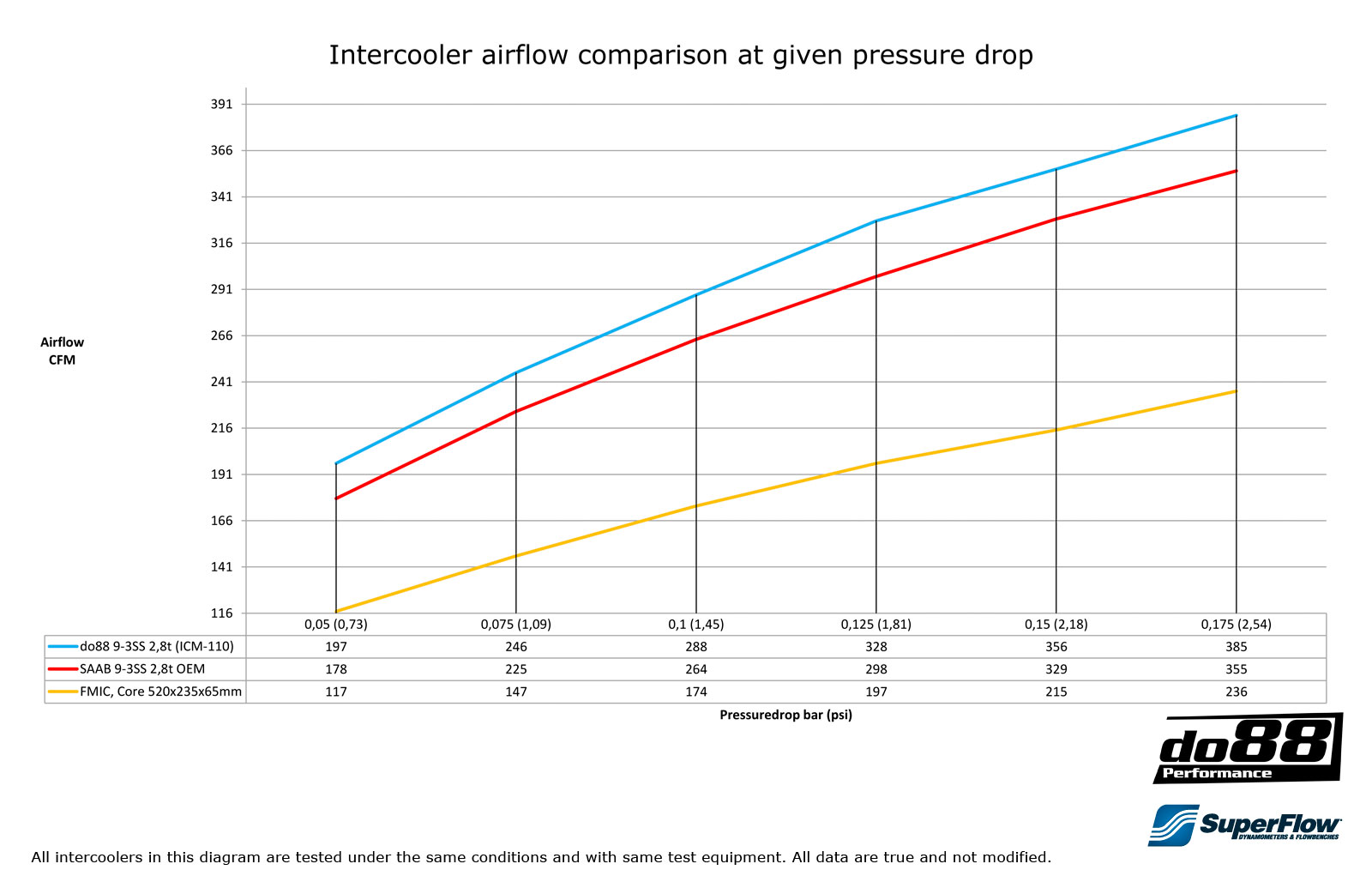 Test results:
Out of these three, during these two test runs, the OEM intercooler has the worst cooling performance. The FMIC offers better cooling but it´s obvious that it really suffers from heat soak. During the second run it almost touches the same IAT as the OEM intercooler. The do88 intercooler, at this stage completely surrounded by heat from the AC condenser working full on, equals the IAT temperature of the FMIC (completely out of the way from the AC condenser) already at 125 km/h, and is then cooler.

During the second pull, again - right afterwards – the do88 intercooler stays well below the FMIC configuration the entire journey and when crossing the 200 km/h mark, the difference is 30 °F, (17° C), IAT! And, what´s more, this entire run the AC was set on LOW, maximum everything, meaning the model adapted intercooler had to deal with all the heat coming from the AC-condenser. Still, 30 °F is the difference in the inlet manifold.

With the AC completely off, you can see that the difference is even bigger.

Now, the above is only concerning the actual cooling abilities. What about airflow then? Jacking up all these three intercoolers in our Superflow SF 1020 device, we can measure airflow. Choosing several different inputs of pressure drop, we get a trustworthy graph of each unit´s airflow. The FMIC is outflowed by OEM by 50 %, and the do88 intercooler by 63 %. How´s that for an improvement?

Fact is that the car is experienced as much slower and more laggy in its appearance with the FMIC compared to stock. Is the FMIC really an upgrade over stock whatsoever, you may ask?

Sure, an intercooler the same size as the do88 / OEM would perform slightly better if situated in the front. The difference with/without the AC on clearly states that there is some heat transfer to consider. So, the absolutely best configuration in this test would be to place the do88 piece where the FMIC was during these tests. It´s just one thing – it won´t fit. Not even close. What we´ve fitted is the largest possible intercooler you can squeeze in without damaging the car. Can you fit something bigger if you are willing to cut and reroute ac-lining etc.? Sure, you can. And you will end up with something similar to what the do88 intercooler performs.

Now, we have made these tests ourselves. Some could argue that we could have, or even would have, adjusted the figures to be more in our favor. That we would have chosen a bad performing intercooler to make the difference appear greater than it really is. Yes, we would have all possibility to do so. Yes, there might be other FMIC configurations that can perform a bit better than the one we used. We know that. But mark our words as we NEVER corrupt any data. We NEVER fiddle with these things. What you see is what we´ve recorded. Nothing else. It would be seriously stupid by us to make a claim like this without presenting true data. Also, it´s free for anyone to replicate our tests.

We hope we have educated some, made others interested, opened up for a discussion and maybe raised some questions.